A very good way of learning Python is trying to work with various Web Services API’s.

In order to answer that, we will first have to get some knowledge about API’s, JSON, Data structures etc.

For those of you that have followed us, you have hopefully gained some basic Python knowledge. And for you who hasn’t, I’d suggest that you start reading our pages at the very top of the site or click on the link below that you want to read more about.

An API is a protocol intended to be used as an interface by software components to communicate with each other. An API is a set of programming instructions and standards for accessing web based software applications (such as above).

With API’s applications talk to each other without any user knowledge or intervention.

Often, companies like Google, Vimeo and Twitter releases it’s API to the public so that developers can develop products that are powered by its service.

It is important to know that an API is a software-to-software interface, not a user interface.

An application programming interface key (API key) is a code passed in by computer programs calling an API to identify the calling program, its developer, or its user to the Web site.

API keys are used to track and control how the API is being used, for example to prevent malicious use or abuse of the API.

The API key often acts as both a unique identifier and a secret token for authentication, and will generally have a set of access rights on the API associated with it.

When we interact with an API we often get the responses in a form called JSON.

Let’s very quickly and without going too much in-dept see what JSON is.

JSON (JavaScript Object Notation) is a compact, text based format for computers to exchange data.

It’s built on two structures:
– A collection of name/value pairs

Object
– Unordered set of name/value pairs.
– Begins with { and ends with }.
– Each name is followed by : (colon)
– The name/value pairs are separated by , (comma).
Array
– Ordered collection of values.
– Begins with [ and ends with ].
– Values are separated by , (comma).
Value
– Can be a string in double quotes, number, or true or false or null,
or an object or an array.
String
– A sequence of zero or more Unicode characters, wrapped in double
quotes, using backslash escapes.
Number
– Integer, long, float

Python provides us with the json and simplejson modules to interact with JSON. At this time, we should know what an API is and what it does. Additional, we now know the basics of JSON.

To get started with accessing web services, we first need to find an URL to call the API.

Before we get the URL, I’d really recommend that you read the documentation provided (if any).

The documentation describes how to use the API and contains important information on how we can interact with it.

The URL that we need can often be found on the company’s website, at the same place where the API documentation is.

Please not that these can be outdated, hence, verify that you have the latest version.

When you have an URL and you have read the documentation provided, we start with importing the modules we need.

What modules do I need?

The modules I usually use when working with JSON are:
– requests
– json (or simplejson)
– pprint

I used to use the urllib2 module to open the URL’s, but ever since Kenneth Reitz gave us the Requests module, I’m letting that module do most of my HTTP tasks.

Working with the data

Once you know which URL you need and have imported the necessary modules, we can use the request module to get the JSON feed.

You can copy and paste the output into a JSON editor to get an easier overview over the data.

I use http://jsoneditoronline.org/ but any JSON editor should do the work.

The next step would be to convert the JSON output into a Python dictionary.

This will take the JSON string and make it a dictionary:
json.loads(r.text)

Note: You can also take a python object and serialize it to JSON, by using json.dumps().

However, that is not what we want to do now.

Looping through the result

We know have a python dictionary and we can start using it to get the results we want.

A common way of doing that is to loop through the result and get the data that you are interested in.

This can sometimes be the tricky part and you need to look carefully how the structure is presented.

Again, using a Json editor will make it easier.

At this point, we should have enough knowledge and information to create a program

This program will show the most popular videos on YouTube. 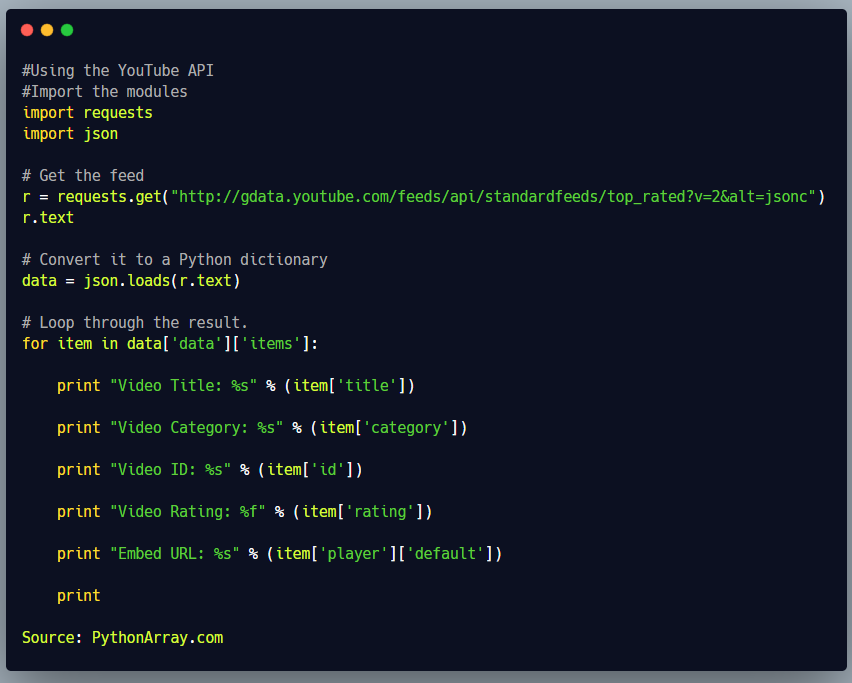 See how we loop through the result to get the keys and values that we want.