You can learn about Control Statements in Python Programs with Outputs helped you to understand the language better.

When the expression evaluates to a non-zero value, the condition is considered to be true, and statements BLOCK 1 are executed; otherwise, statements BLOCK 2 are executed. Blocks can have multiple lines. As long as they are all indented with the same amount of space, they constitute one block. Figure 5.5 shows the flow diagram of the if-else statement.
For example, 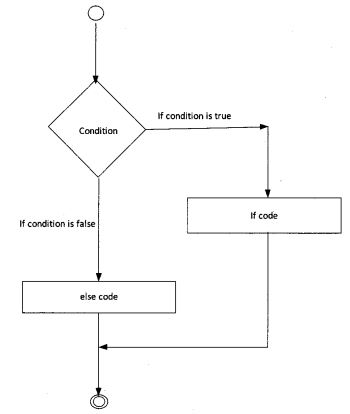 Example 2.
Program to print absolute value of a number provided by the user.

Example 3.
Program to check divisibility of a number.

Write a program to print the smallest number.
Suppose, you want to write a program that accepts a value of a variable from the user and prints whether the number is positive or negative using the if-else statement. The program is shown in Figure 5.10.

Example 8.
Program to display menu to calculate area of square or rectangle.

In the program shown in figure 5.13, the if statement rearranges any two values stored in x and y in such a way that the smaller number will always be in x and the largest number always in y. If the two numbers are already in the proper order, the compound statement will not be executed. You will always get the larger value first and then the smaller value.

Example 10.
Program to print if the number is even or odd.

Example 11.
Program to display the menu to calculate the sum or product of entered numbers.