Introduction to Python Classes (Part 1 of 2) 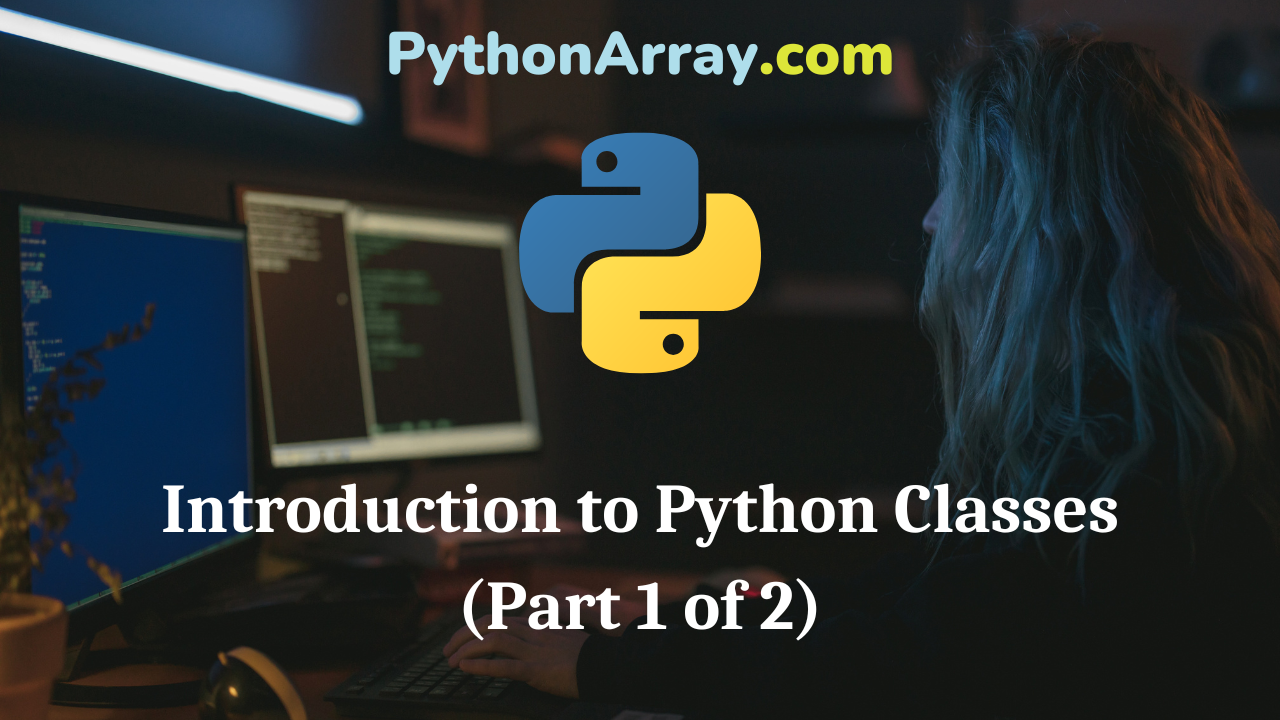 Classes are a way of grouping related bits of information together into a single unit (also known as an object), along with functions that can be called to manipulate that object (also known as methods). For example, if you want to track information about a person, you might want to record their name, address, and phone number, and be able to manipulate all of these as a single unit.

Python has a slightly idiosyncratic way of handling classes, so even if you’re familiar with object-oriented languages like C++ or Java, it’s still worth digging into Python classes since there are a few things that are different.

Before we start, it’s important to understand the difference between a class and an object. A class is simply a description of what things should look like, what variables will be grouped together, and what functions can be called to manipulate those variables. Using this description, Python can then create many instances of the class (or objects), which can then be manipulated independently. Think of a class as a cookie-cutter – it’s not a cookie itself, but it’s a description of what a cookie looks like, and can be used to create many individual cookies, each of which can be eaten separately. Yum!

Let’s start off by defining a simple class:

The class is called Foo and as usual, we use indentation to tell Python where the class definition starts and ends. In this example, the class definition consists of two function definitions (or methods), one called __init__ and the other printVal. There is also one member variable, not explicitly defined, but we’ll explain below how it gets created. 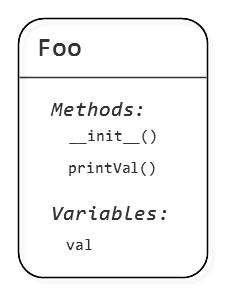 The diagram shows what the class definition looks like – 2 methods and 1 member variable. Using this definition, we can then create many instances of the class.

You can see that both methods take a parameter called self. It doesn’t have to be called self but this is the Python convention and while you could call it this or me or something else, you will annoy other Python programmers who might look at your code in the future if you call it anything other than self. Because we can create many instances of a class, when a class method is called, it needs to know which instance it is working with, and that’s what Python will pass in via the self parameter.

__init__ is a special method that is called whenever Python creates a new instance of the class (i.e. uses the cookie cutter to create a new cookie). In our example, it accepts one parameter (other than the mandatory self), called val, and takes a copy of it in a member variable, also called val. Unlike other languages, where variables must be defined before they are used, Python creates variables on the fly, when they are first assigned, and class member variables are no different. To differentiate between the val variable that was passed in as a parameter and the val class member variable, we prefix the latter with self. So, in the following statement:

This is all a bit confusing, so let’s take a look at an example:

This creates an instance of our class (i.e. creates a new cookie using the cookie cutter). Python automatically calls the __init__ method for us, passing in the value we specified (1). So, we get one of these: 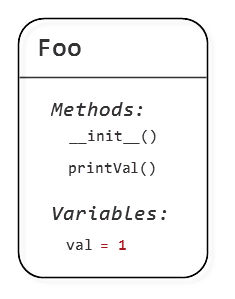 Let’s create another one:

Exactly the same thing happens, except that 2 gets passed in to the __init__ method.

We now have two independent objects, with different values for the val member variable: 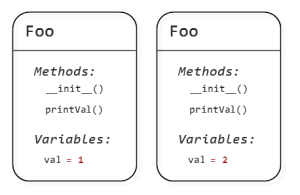 If we call printVal for the first object, it will print out the value of its member variable:

And if we call printVal for the second object, it will print out the value of its member variable:

Python classes have many standard methods, such as __init__ which we saw above, that gets called when a new instance of the class is created. These are some of the more commonly-used ones:

Here’s a simple example of a class in action that models a single card in a deck of playing cards.

We start off by defining some class constants to represent each suit, and a lookup table that makes it easy to convert them to the name of each suit. We also define a lookup table for the names of special cards (Ace, Jack, Queen and King).

The constructor, or __init__ method, accepts two parameters, the suit and value, and stores them in member variables.

The special __cmp__ method is called whenever Python wants to compare a Card object with something else. The convention is that this method should return a negative value if the object is less-than the other object, a positive value if it is greater, or zero if they are the same. Note that the other object passed in to be compared against can be of any type but for simplicity, we assume it’s also a Card object.

The special __str__ method is called whenever Python wants to print out a Card object, and so we return a human-readable representation of the card.

Here is the class in action:

Note that if we hadn’t defined a custom __str__ method, Python would have come up with its own representation of the object, something like this:

So, you can see why it’s a good idea to always provide your own __str__ method. 🙂

In Python, methods and member variables are always public i.e. anyone can access them. This is not very good for encapsulation (the idea that class methods should be the only place where member variables can be changed, to ensure that everything remains correct and consistent), so Python has the convention that a class method or variable that starts with an underscore should be considered private. However, this is only a convention, so if you really want to start mucking around inside a class, you can, but if things break, you only have yourself to blame!

Class methods and variable names that start with two underscores are considered to be private to that class i.e. a derived class can define a similarly-named method or variable and it won’t interfere with any other definitions. Again, this is simply a convention, so if you’re determined to poke around in another class’s private parts, you can, but this gives you some protection against conflicting names.

We can take advantage of the “everything is public” aspect of Python classes to create a simple data structure that groups several variables together (similar to C++ POD’s, or Java POJO’s):

We create an empty class definition, then take advantage of the fact that Python will automatically create member variables when they are first assigned.