In the previous sections, we have discussed decision-making statements that control the flow either sequentially or skip some statements depending upon the test condition. In some situations such as computing the table of a number, it is required to repeat some set of statements to attain the required results. This repetition can be achieved by using a loop control structure. In this section, we will discuss various loops provided by the Python language. We will demonstrate how loops are supportive and effective in the Python language.

The repetition of a loop can also be termed as iteration, which means repetitive execution of the same set of instructions for a given number of times or until a particular result is obtained. The repetition of a loop is controlled by a test expression (condition) specified with the loop. The loop begins and continues its execution as long as the test expression evaluates to true. The loop terminates when the conditional expression evaluates to false. After that, the control transfers to the next statement that follows the loop. The Python language supports 2 types of iterative or looping statements while and for as displayed in Table 4.2.

The while loop in Python is used to iterate over a block of code as long as the test expression (condition) is true. It is also called a preset loop that is used when it is not predetermined how many times the loop will be iterated. The syntax of the while loop is given as follows:

Code 4.7. Illustrates a simple program to display counting from 1 to 10 using a while loop. In the program, it can be seen that the count variable is initialized to 1 and the test expression count<=10 evaluates to true as 1<=10. Thus, the body of the loop begins execution and prints the value of the count variable as 1. The count variable is incremented by 1 and becomes count=2. Then, control goes back to the test expression count<=10, that is 2<=10, which is true again, and the body of while loop executed again and so on. The loop will continue to execute until the value of count becomes 11 and test expression 11 <=10 evaluates to false. Eventually, we obtain the desired output.

Another example of while is illustrated in Code 4.8. The program computes the factorial of the number input by the user. We ask the user to enter a number, n. while loop is used to compute the factorial of number n. The condition will be true as long as our counter variable i is less than or equal to n. We need to increase the value of the counter variable in the body of the loop. This is an essential part and cannot be skipped. Undoing so will result in an infinite loop (never-ending loop). Finally, the result is displayed.

Code: 4.8. Illustration of while loop to compute factorial of a number.

Note:
The test condition and test expression can be used interchangeably as both these terms refer to a similar meaning.

A loop becomes an infinite loop if a condition never becomes FALSE. The programmer must be cautious when using while loops because of the possibility that the test_condition never evaluates to a FALSE value. This results in a loop that never ends. Such a loop is called an infinite loop. The programming example of an infinite loop is given in Code: 4.9. In this example since n=5, the test-condition n>0 inside while remains true, and therefore, the message “n is always positive” is displayed indefinite times. In such cases, the program is terminated by pressing ctrl+c altogether.

Code: 4.9. Illustration of the infinite while loop.

Note:
An infinite loop can be advantageous in client/server programming, where the server needs to run constantly, in order to make clients communicate with it.

Using else Statement with while Loop

Code: 4.10, Illustration of use of else with while loop.

If a sequence contains an expression list, it is evaluated first. Then, the first item in the sequence is assigned to the counter variable val. Next, the statements block is executed. Each item in the list is assigned to val, and the statement(s) block is executed until the entire sequence is drained out. Indentation is used to separate the body of for loop from the rest of the code. The flow diagram of for loop is given in Fig. 4.5. 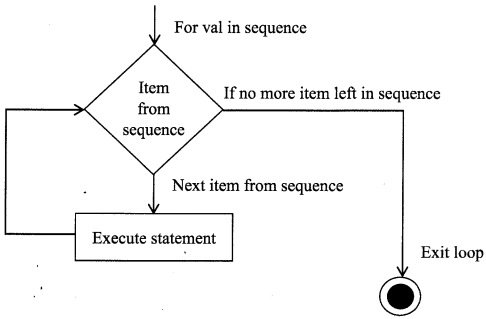 The programming example of for loop is presented in Code. 4.11. The program displays the elements of a list using for loop. Another example of for loop is given in Code 4.12., where the string values are accessed using for loop. In this program, four cities are displayed. Here, the counter variable is a city, which displays the values in sequence ‘cities’, until the entire sequence is exhausted by for loop. One can also access the individual characters of string using for loop, which is also illustrated in the program Code 4.12., where the individual characters of PROGRAM string are displayed.

The range () function is quite useful in the Python programming language. It is used to generate a sequence of numbers. Most commonly, it is used with, the for loop and it generates lists of arithmetic progression. The range() function can hold three arguments, start, stop and step size as range(start,stop,step size). The step size defaults to 1 if not provided. This function would be inefficient if it stores all the values in memory. So it remembers the start, stop, step size and generates the next number on the go. In the above one argument is compulsory and the other two are optional as described below:

• range(12) : it will generate numbers from 0 to 11 (12 numbers). That means it generates a number up to but excluding the last number in the specified range. By default, it starts from 0 and goes up to one less than the specified number as shown in the example given in Code: 4.13. This argument is compulsory.

• range(2, 20, 2): in this, the third argument represents the step size which is 2, which is to be added to the current number to generate the next number in sequence up to 20. To specify the step size is also optional as by default the step size is 1 in range() function.

To illustrate the use of range() function, it is used with the list() function as shown in Code: 4.13. (interactive mode)
Code: 4.13, Illustration of rangeQ function.

The alcove statements are written directly on the Python prompt. The first statement represents the range that varies from 0 to 12. The second statement lists the values in the range(12) by using the list() method. If we specify the upper bound and lower bound in the range function then the list() method displays the values within that range as shown in the third statement. The fourth statement represents three arguments of range() method i.e., start, stop, and step size and the list method display the output as per the values provided in these three arguments.

Code: 4.14. Program to illustrate the use of range function in for loop.

for Loop with else

Alike while loop, a for loop can work with an optional else block as ” well. The else part gets control of the interpreter if all the elements in the sequence used in for loop drained out. Alike C/C++ statements if the break statement is used in Python to stop a for loop then else part gets ignored. Hence, a for loop’s else part runs only if no break encounters. The program to search an element from a list of numbers is given as an example of this concept in Code: 4.15.

Code: 4.15. Program to illustrate the use of else with for loop.

Python programming language allows using one loop inside another loop. The following section shows a few examples to illustrate the concept. The syntax of nested for loop is as under

An advantage of nesting of loops is that we can put any type of loop inside any other type of loop. For example, a for loop can be put inside a while loop or vice versa. The program Code: 4.16. computes factorials of first n natural numbers using nested for loops.