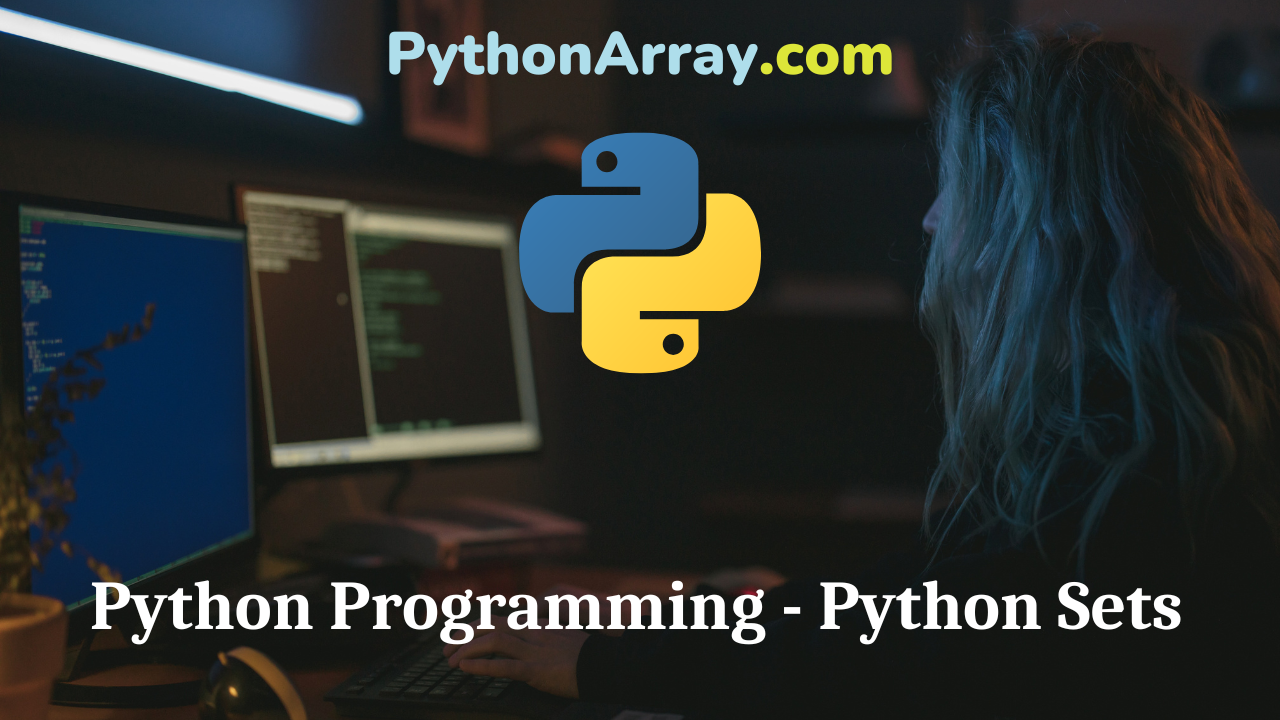 As we have learned in mathematics about sets, the Python language also provides a new data type called set to handle all set operations. A set is an unordered collection of elements. There is no duplicity in the set and alike tuple, the set is immutable (can not alter). A set can contain a heterogeneous type of data. Since the set is an immutable data type, therefore, list or dictionary can not be set members. As mentioned earlier in Chapter 2, the sets can be used to perform all mathematical set operations such as union, intersection, difference, etc. In the following sub-section, we will learn Python set in detail.

A set is created by using the built-in Python function set(). All the elements of a set are placed inside the set function by enclosing within braces { } and separated by commas. The programming example to create a set in Python is given in Code 5.27.

In this program, we explore all the methods of creating a set in Python. In the first part, the set is created with the named dataset by using the set() function. Secondly, a set is created without using the built-in set() function. The programmer must note that a set can also be created by putting its element into the curly braces. An empty set can also be created by leaving the curly braces {} empty as shown in the program. Then dataset4 contains heterogeneous kind of data, in which we see that dataset4 contains 3 elements, where the second element is a tuple.

Consequently, dataset5 is created with heterogeneous data set again. The dataset5 contains a list of its member. While executing this program, all the datasets from dataset through dataset4 provide the intended output. However, the printing of dataset5 results” into an error, as the list can not be a member of a set because Python sets are immutable entities and can not alter. Since lists and dictionaries are mutable, they can not be a member of a set. The output can be seen in the output section of this program:

Code: 5.27. Illustration of creating a set in. Python.

Changing/Adding Elements to a Set

As it is mentioned earlier that, sets are immutable, i.e., we cannot change the value of any element of a set. Moreover, sets are unordered therefore, indexing has no meaning in the context of sets. As a consequence of that, we cannot access the elements of a set by specific indexing and slicing operator.

It is to be noted that, more than one element can be added to the set using the update() method and in square brackets []. From the output of this program code, we see the intended results. Moreover, it is seen that the Python sets are unordered and the elements are displayed out of order despite their actual assignment while creating the set. This demonstrates that indexing has no relevance in sets. Thus, slicing and indexing operators cannot be used with sets.

Removing Elements from a Set

The Python language provides two methods discard() and remove( ) to remove elements from a set. Both of these functions perform the same task with the only difference that if the element to be deleted does not exist in the set then the remove() method raises an error. Whereas, the discard() method does not raise an error for the same case. The programming illustration for the same is given in Code 5.29. The program demonstrates that initially a dataset is created with 6 elements {10,20, 30,40,50,60}. Then, an element 30 is removed from the dataset by using the remove() method. Subsequently, an element 50 is deleted from dataset1 using the discard ( ) method. The updated dataset1 is printed after performing these two operations and we obtain the required output. Then, the discard ( ) method is used to remove 35 from the dataset1, although it does not exist in the set. It will not raise any error on the prompt. On the other hand, while using the remove ( ) method to eradicate 35 an error occurs as shown in the output section of this program.

Code: 5.29. Illustration of removing elements from a set.

There exist another method pop() to remove an element from a Python set. Since, the set is an unordered list of elements, the pop() method removes an element from the set randomly and the user does not need to provide the value of a specific element to be deleted as that for removes} and discards} methods. The Python language provides another method clear ( ) to remove all the elements of a set in one go. The programming illustration of pop() and clear() methods is given in Code 5.30. In this program, we see that by using the pop() method the element 40 has been removed from the set. The use of the clear ( ) method signifies the removal of all the elements of the set and an empty set is returned as an output.

The basic set operations union, intersection, difference, and the symmetric difference can be performed very efficiently over the Python sets. The description of each one of them is provided in the following sub-sections.

Code: 5.31. Illustration of the union of sets in Python.

Code: 5.32. Illustration of intersection of sets in Python.

Code: 5.33. Illustration of difference of sets in Python.

The python language offers various methods to be used in conjunction with sets. Many of them, we have discussed in the previous sub-sections with their respective examples. The list of all the Python set methods is given in Table 5.8. with the description of each.

As we have learned in the previous sections the ‘in’ operator is used to test the membership of a particular element in the list and tuple. Similarly, the ‘in’ operator can be used to determine the membership of a set element also. The programming illustration for the same is given in Code 5.35. It is apparent from this code that as 10 is the member of set x. Therefore, the result of 10 in x comes out to be true. However, the result of 50 in y is false as 50 is not a member of set y.

Alike lists and tuples the Python sets are also iterable. The ‘in’ operator is used with for loop to access all the elements of a set. The programming illustration for the same is given Code 5.36. This program illustrates that the set members can be accessed very efficiently by using for loop. The first set X is created, which contains numeric values.

Another set of cities are created, which contains name of three cities. Subsequently, a third set is created with the set function, which contains a string “Kolkata”. By using a for loop and in operator, all these three sets are accessed, which displays the elements of the set in arbitrary order for all three sets.

The Python language offers a set of functions to be used with sets. All the Python set functions are listed in Table 5.9. All these functions are quite simple and can be programmed very easily.

The Python language offers a new data type of sets called frozenset. As indicated by the name, the elements of a frozen set cannot be changed. As we know that tuples are immutable lists, similarly frozen sets are referred to as immutable sets. The frozenset() supports all the Python set methods except add(), remove(), and discard() because the elements of frozensets can not be altered. The programming illustration of frozenset is given in Code 5.37. it is apparent from the code that yset is a normal set, therefore a new element 12 is added to it by using the add method. On the other hand, the set is a frozenset. therefore, adding an element to it raises an AttributeError as shown in the output section of this program.