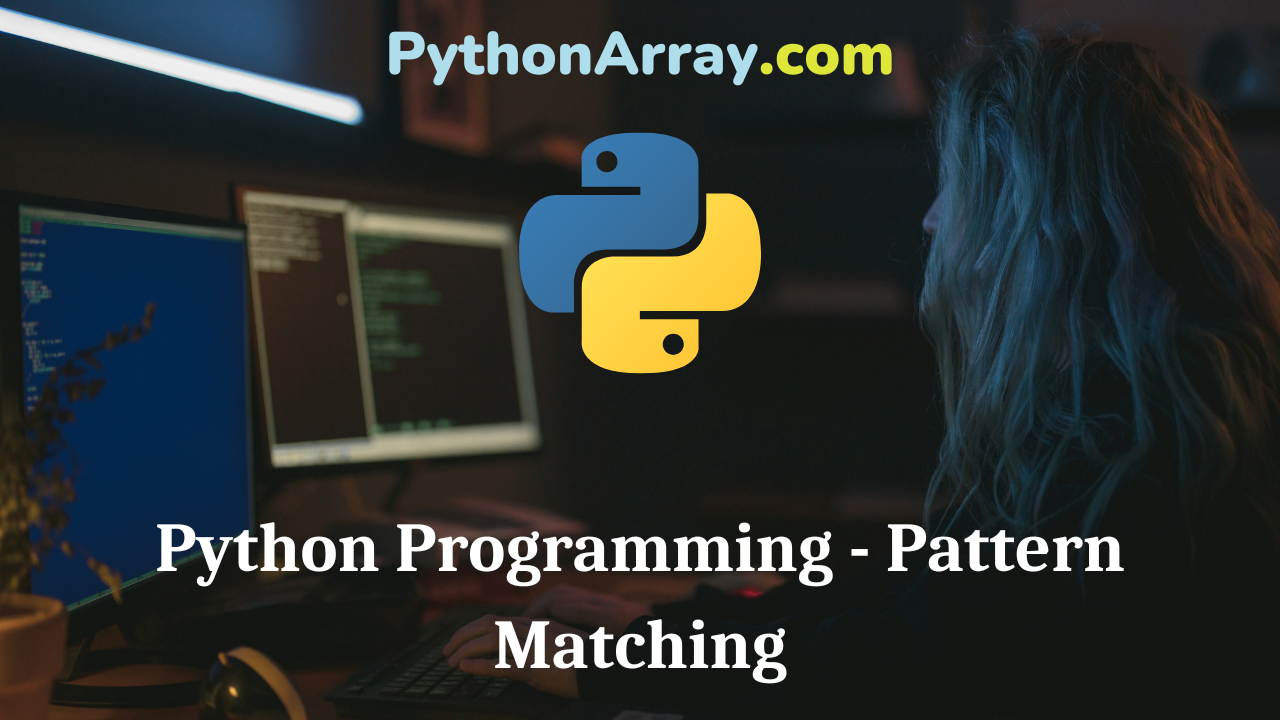 Also Read: Java Program to Convert Foot to Yard and Yard to Foot

Regular expressions, called regexes for short, are descriptions for a pattern of text. A regular expression in a programming language is a special text string used for describing a search pattern. It is extremely useful for extracting information from text such as code, files, logs, spreadsheets, or even documents. They are used at the server side to validate the format of email addresses or passwords during registration, used for parsing text data files to find, replace or delete certain strings, etc. It is also used for webpage “Scraping” (extract a large amount of data from websites).

In Python, a regular expression is denoted as RE (REs, regexes, or regex pattern) are imported through re module, “re” module included with Python primarily used for string searching and manipulation. In order to use the search ( ) function, you need to import re first and then execute the code.
>>> import re

The re-attribute of a matched object returns a regular expression object.

When the r or R prefix is used before a regular expression, it means raw string. For example, ‘\n’ is a new line whereas r’\n’ means two characters: a backslash \ followed by n. Backlash \ is used to escape various characters including all metacharacters. However, using the r prefix makes \ treat as a normal character.

Rules for a Match

The basic rules of regular expression search for a pattern within a string are:
(a) The search proceeds through the string from start to end.
(b) All of the patterns must be matched, but not all of the string.
(c) The search stops at the first match.

All the regex functions in Python are in the re module. Regular expression methods include re.match ( ), re.search ( )  & re.findall( ). Many Python regex methods and Regex functions take an optional argument called Flags.

The match( ) function returns a match object if the text matches the pattern. Otherwise it returns None. The matchQ functions looks for a pattern at the beginning of a string:

The search( ) function checks for a match anywhere in the string . If there is more than one match , only the first occurrence of the match wil1 be burned.

You can change the way the matching engine processes an expression using option flags. The flags can be combined using a bitwise or operation, and passed to compile( ), search( ), match ( ), and other functions that accept a pattern for searching. Compilation flags let you modify some aspects of how regular expressions work. Flags are available in the re module under two names, a long name such as IGNORECASE, and a short, one-letter form such as I. Various flags used in Python include IGNORECASE [re. I] performs case-insensitive matching; character class and literal strings will match letters by ignoring case.
MULTILINE [re.M] flag controls how the pattern matching code processes anchoring instructions for text containing newline characters. Within a string made of many lines, allow A and $ to match the start and end of each line.

DOTALL [re.S] is the other flag related to multiline text. Normally the dot character. matches everything in the input text except a newline character. The flag allows dot to match newlines as well.

You can use the sub( ) function to substitute the part of a string with another. The method returns a string where matched occurrences are replaced with the content of replacing variable. sub() takes three arguments- pattern, substring, and string. For example,
>>> re.sub(‘Aa’,’an’,’a apple’)
‘an apple’
Here, you used A so it won’t change apple to apple.

The subn( ) is similar to sub( ) expect it returns both the modified string and the number of substitutions made. For example,

Regular expressions are compiled into RegexObject instances, which then have methods for various operations such as searching for pattern matches or performing string substitutions. You can learn about this by interactively experimenting with the re module. It allows you to enter REs and strings and displays whether the RE matches or fails. First, run the Python interpreter, import the re module, and compile a RE.
>>> import re
>>> p.re.compile(‘[a-z]+’)
>>> p
re.compile(‘ [a-z]+’)
Now, you can try matching various strings against the RE ‘[a-z]+’. An empty string should not match at all since + means ‘one or more repetitions’. match() should return None in this case, which will cause the interpreter to print no output. You can explicitly print the result of the match ( ) to make this clear.
>>> p.match(“”)
>>> print(p.match(“”))
None
Now, let’s try it on a string that it should match, such as “hello”. In this case, match() will return a MatchObject, so you should store the result in a variable for later use.
>>> m=p.match(‘hello’)
>>> print(m)
<re.Match object; span=(0, 5),
match=’hello’ >
Now you can query the MatchObject for information about the matching string. MatchObject instances also have several methods and attributes; the most important ones are:

The group ( ) method returns the part of the string where there is a match. If a match is found, if not, it returns None.
>>> m.group()
‘hello’

The start ( ) function returns the index of the start of the matched substring.