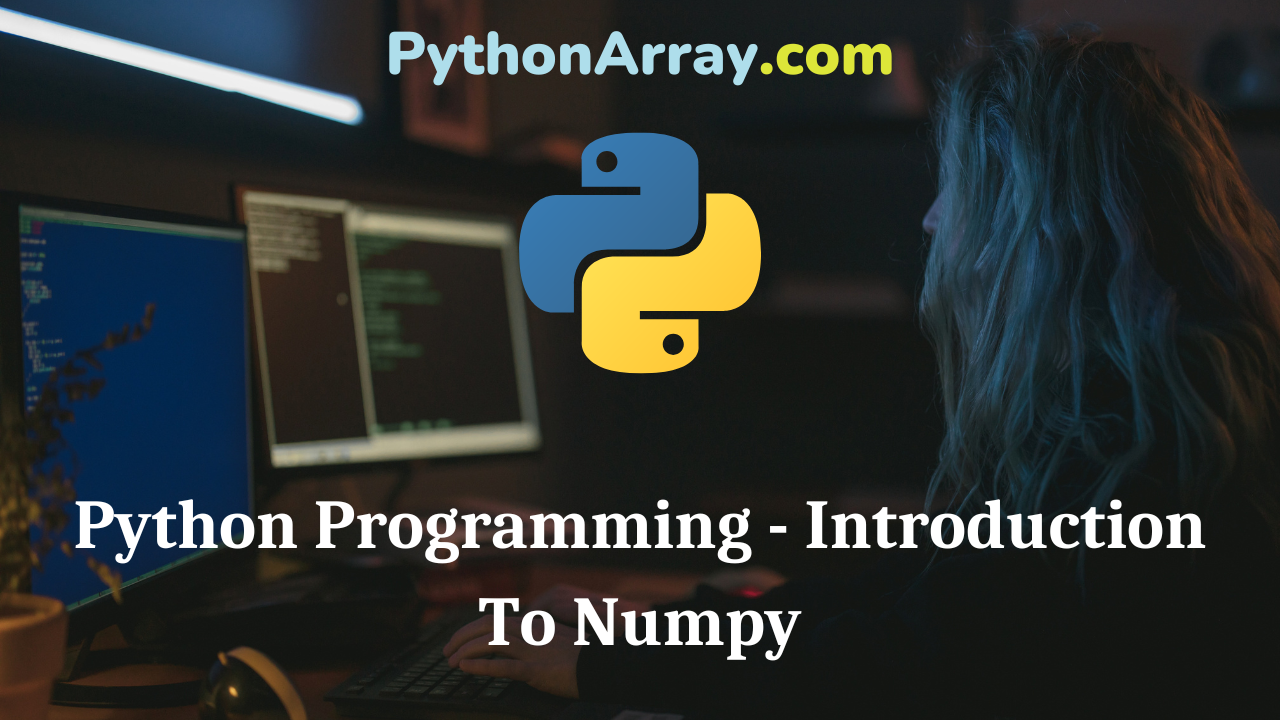 You can learn about NumPy in Python Programs with Outputs helped you to understand the language better.

NumPy stands for ‘Numerical Python’ or ‘Numeric Python’. It is an open-source module of Python which provides fast mathematical computation on arrays and matrices. Since arrays and matrices are an essential part of the Machine Learning ecosystem, NumPy along with Machine Learning modules like Scikit-learn, Pandas, Matplotlib, TensorFlow, etc., complete the Python Machine Learning Ecosystem. NumPy is also useful in linear algebra, random number capability etc.
In order to use Numpy, you must import in your module by using a statement like:
import numpy as np
The above statement has given np as alias name for numpy module. Once imported you can use both names i.e., numpy or np for functions, e.g. num- py.array( ) is same as np.array( ).

Arrays, in general, refer to a named group of homogeneous (of the same type) elements. For example, students array containing 5 entries as [84, 87, 63, 74, 52] then students is an array. Each item stored in an array is called an element. Each location of an element in an array has a numerical index, which is used to identify the element. Numpy refers to the dimensions of its arrays as axes. Axes are always numbered 0 onwards. The shape of an array depends upon the list of integers giving the size of the array along each dimension.
A NumPy array is simply a grid that contains values of the same/homogeneous type. NumPy Arrays come in two forms:

(a) l-D(one-dimensional) arrays known as Vectors(having single row/column only). To create a one-dimensional NumPy array, you can simply pass a Python list to the array method. For example,
# Creating a 1-D Numpy array
import NumPy as np
x = [2,4,6,81
nums=np.array(x)
print(nuns)

>>>
[2, 4 , 6, 8]
>>>
In the script above you first imported the NumPy library as np, and created a list x. We then passed this list to the array function of the NumPy library. Finally, you printed the nums array on the screen.

>>>
14
14
[[ 11,2,3,4]
[11.12.13.14]]
>>>
The above script results in a matrix where every inner list in the outer list becomes a row. The number of columns is equal to the number of elements in each inner list.
Individual elements of array can be accessed using arrayname [index] and multi-dimension arrays can be accessed as arrayname[row][col] or arrayna- me[row,col].

NumPy works with Python objects called multi-dimensional arrays. Arrays are basically collections of values, and they have one or more dimensions. NumPy array data structure is also called ndarray, short for the n-dimensional array. It is also known as the alias array. An array with one dimension is called a vector and an array with two dimensions is called a! matrix.
NumPy’s main object is the homogeneous multidimensional array. It is a table of elements (usually numbers), all of the same type, indexed by positive integers. In NumPy, dimensions are called axes. The number of axes is rank.
For example, the coordinates of a point in 3D space [1, 2, 1] have one axis. That axis has 3 elements in it, so you can say it has a length of 3. In the example given below, the array has 2 axes. The first axis has a length of 2, the second axis has a length of 3.
[[ 1., 0., 0.] ,
[ 0. , 1., 2.] ]

A data type describes what type of data is to be stored in a variable, or in any Python object. A data type object is an instance of NumPy.type class which describes how the bytes in the fixed-size block of memory corresponding to an array item should be interpreted, types can be referenced by their class, long name, or short name. It describes the following aspects of the data:

NumPy supports a much greater variety of numerical types. There are 5 basic numerical types representing booleans (bool), integers (int), unsigned integers (uint), floating-point (float), and complex. Those with numbers in their name indicate the bit- size of the type (Number of bits needed to represent a single value in memory). One bit can hold the value 0 or 1, and computers organize memory in units of bytes, which are 8 bits, allowing for 28 = 256 different values per byte. Along with the above numerical types, it also supports strings (str, Unicode), object, which represents items in the array as Python objects and records, use for arbitrary data structures in record arrays.

an array is created from exiting data by the following functions.
numpy. asarray
this array is used from converting the python sequence into array. this routine is used to create an array by using the existing data in the form of lists, or tuples.
numpy.asarray(sequence, dtype = None,
order = None)
It accepts the following parameters.
(a) sequence: It is the Python sequence that is to be converted into the Python array. Input data can be in any form such as list, list of tuples, tuples, a tuple of tuples, or tuple of lists.
(b) dtype: It is the data type of each item of the array.
(c) order: It can be set to C (row-major) or F (column-major). The default is C.

You can also concatenate more than two arrays at once. In addition to the concatenation function, Numpy also offers two convenient functions hstack(horizontal stack) and vstack(vertical stack) which allows you to concatenate two multi-dimensional arrays vertically or horizontally. (See Figure 13.24).

The opposite of concatenation is splitting, i.e., to split a single array into multiple arrays which are implemented by the functions np.split, np.hsplit,and np.vsplit. For each of these, you can pass a list of indices giving the split points. (See Figure 13.25).