Decision-making is done with a conditional statement which allows selecting one or another execution path in a program. It causes to execution of a particular block of statements after the evaluation of a given conditional expression. In other words, appropriate action is preceded by the evaluation of a test condition to either true or false. Table 4.1. depicts a list of decision-making control structures supported by Python language. Now, we will learn each of the control structures in detail.

Note:
Python programming language assumes any non¬zero and non-null values as TRUE, and if it is either zero or null, then it is assumed as FALSE value.

Here, the program evaluates the test condition (expression) and will execute statement(s) only if the test expression evaluates to True. If the test expression is False, the statement(s) does not get executed. As we know that, in Python, indentation is necessary. The beginning of a block is always marked with the indented statement and the closing of a block is marked by the unindented statement. Therefore, the body of the if statement is indicated by the indentation. The body starts with an indentation and the first unindented line marks the end. Python interprets non-zero values as True. None and 0 are interpreted as False. The flow diagram of the if statement is given in Fig. 4.1. 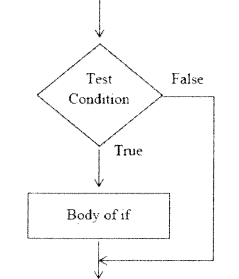 Code: 4.1 Illustration of if statement to determine whether a number is even.

We can see this in our two outputs above. Another example of if a statement is given in Code 4.2, the program code determines whether a number is positive. It is explicable from the code that if the user inputs the value of the number variable 5 then the “It is a positive number” message will be displayed along with the “out of if block” message. However, when the user inputs a – 5 then if the statement evaluates to false, and “Out of if block” message is displayed bypassing the indented statement associated with the if statement.

Code 4.2. Illustration of if statement to determine whether a number is positive. 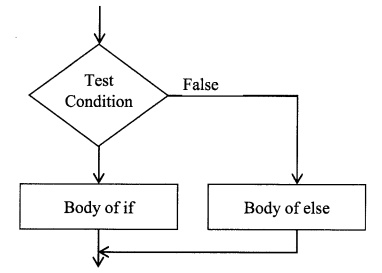 The programming example of if…else construct is given in Code 4.3. The program determines whether a number is even or odd. In the previous example, we see that when the test expression number%2==0 evaluates to false then the “Out of if block” statement is executed. However, by using if.. .else construct the output is displayed as “Number is odd” for a false test condition. Similarly, in the case of another program, where it is determined that whether a number is positive or not. For a false condition, the else statement block is executed, which displays “It is a negative number”, as shown in Code 4.4.

Code: 4.3. To determine whether a number is even or odd using if…else construct.

Code 4.4. To determine whether a number is positive or negative using if…else construct.

The elif statement allows you to check multiple expressions for true and execute a block of code as soon as one of the conditions evaluates to true. It is similar to if…else if…else construct of C, C++, and Java. Similar to the else, the elif statement is optional. However, unlike else, there can be an arbitrary number of elif statements following an if. Like, if statement elif is associated with a test condition. The syntax of if…elif…else is given as under:

As shown in the syntax, If the test condition for if evaluates to false, it checks the condition of the next elif block and so on. If all the conditions are false, a block of else is executed. Only one of the several if…elif…else blocks is executed according to the condition. The flow diagram of if…elif… else is given in Fig. 4.3.

Code:4.5. To determine whether a number is positive, negative or zero using if.. .elif.. .else construct

The program representing the significance of nested if is given in Code:4.6. When the user inputs the value of number=5 then the condition number>=0 becomes true and control goes inside the nested if block, where it checks for number=0 test condition, which becomes false. Then else part associated with the nested if is executed and the result is displayed as “Positive number”. Similarly, in the second output when the user inputs number=0 the “Zero” message is displayed and in the third output, we see that by entering a negative number the outer if the condition becomes false and it’s associated else part is executed, which displays “Negative number”.

Code:4.6. To determine whether a number is positive, negative or zero using nested if statements.