Python Programming – Creation, Initialization and Accessing The Elements In A Dictionary 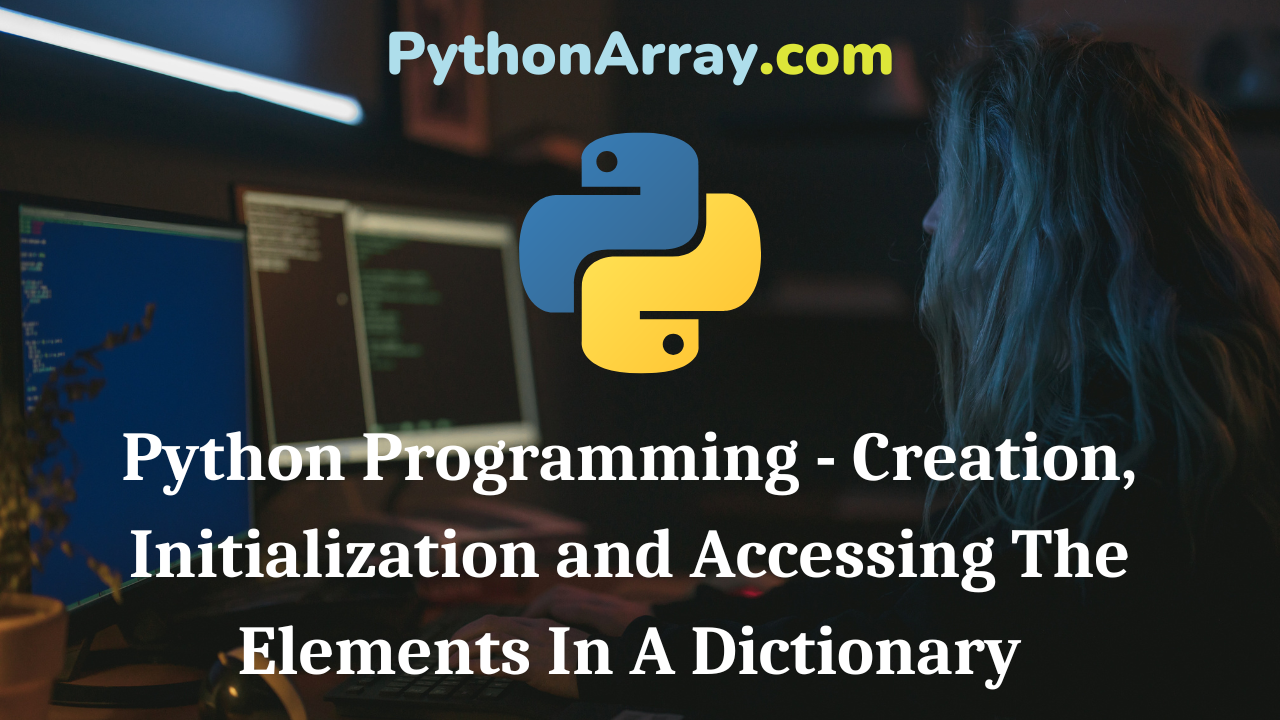 You can learn about Dictionaries in Python Programs with Outputs helped you to understand the language better.

Python Programming – Creation, Initialization and Accessing The Elements In A Dictionary

A collection that allows us to look up information associated with arbitrary keys is called mapping. Python dictionaries are mappings. Some other programming languages provide similar structures called hashes or associative arrays. The dictionary

can be created in Python by listing key: value pairs inside curly braces. A simple dictionary shown in Figure 9.1 stores some usernames and passwords.
# Creating a Dictionary
>>> password = {“Aman”:”101″, “Preeti”:”204″, “Babita”:”107″}
Notice that keys and values are joined together with a and commas are used to separate the pairs. The main use of the dictionary is to look up the value associated with a particular key. This is done through indexing notation. More than one entry per key is not allowed, which means no duplicate key is allowed.

An empty dictionary (without any items) is written with just two curly braces, like this: { }.
>>> dict1 = { } # it is an empty dictionary with no elements
>>> dict1
{ }
type( ) returns the type of the passed variable. If passed variable is dictionary, then it would return the object representing the ‘diet’ class.
>>> type (dic1)
<class ‘dict’>
To create an empty dictionary, you can either use the dict( ) function with no inputs, or assign a pair of curly brackets with nothing in between to a variable. You can confirm that both methods will produce the same result. For example,

To create dictionary using built-in function dict( ), the argument to dict( ) should be a sequence of key- value pairs.

# using built-in function dict( )
my_dict = diet({1:’apple’, 2:’banana’})
The following examples store employee information as a dictionary:
>>> dict2 = {‘name’: ‘Raj’, ‘deptcode’:
7} # Creating a Dictionary
>>> dict1, dict2
({ }, {‘deptcode’: 7, ‘name’: ‘Raj’})
To access dictionary elements, you use the familiar square brackets along with the key to obtaining its value:
>>> dict2[‘name’] # accessing a element
using key
‘Raj ‘
Dictionary dict1 is empty while dict2 has two data items. The keys in dict2 are ‘name’ and ‘deptcode’, and their associated value items are ‘Raj’ and 7, respectively. Access to the value is through the key, as you can see from the explicit access to the ‘name’ key.
If you attempt to access a data item with a key that is not a part of the dictionary, you get an error:
>>> dict2[‘salary’]
Traceback (most recent call last):
File “<pyshe11#1>”, line 1, in <module> dict2[‘salary’]
KeyError: ‘salary’

‘key name in the dictionary
It will return True if the dictionary has that key and False otherwise.
>>> ‘salary’ in dict2
False
>>> ‘name’ in dict2
True
>>> dict2[‘name’]
‘ Raj ‘
Once the in has returned True, meaning that the key exists, then you can access it without having to worry about getting the KeyError.

Traversing a dictionary means visiting each element of the dictionary to display its values on the screen. Similar to the lists, you can use a “for in” loop to traverse through a dictionary. In general, it is the keys that enable iteration.

Example
Demo of traversing a dictionary.

In Figure 9.2 ‘in’ operator is used with for loop to iterates each key of a dictionary.

Appending Values in a Dictionary

Also Read: C++ List – Find Contains How to Search an Element in std::list?

Write the output of the following: