You can learn about Operators in Python Programs with Outputs helped you to understand the language better.

A bit is the smallest possible unit of data storage, and it can have only one of the two values : 0 and 1. Bitwise operator works on bits and performs the bit-by-bit operation, instead of whole. Table 4.4 shows the bitwise operators and their meaning.

Table 4.4 Bitwise Operators and their Meaning

The right shift operator (>>) shifts the bits of the number to the right by the number of bits specified. This means that those many bits are lost.

In general, the right shift operator is used in the form:
variable >> number-of-bits
11 >> 1 gives 5. 11 is represented in bits by 1011 which when right-shifted by 1-bit gives 101, which is the decimal 5. Take another example; you know that the decimal number 8 is represented in binary form as:
1000
Similarly, the decimal number 4 is represented as:
100
If data is represented in a computer using 8 bits form, then decimal digits 8 and 4 will be represented by 00001000 and 00000100, respectively. The only difference between these two numbers is that the “1” in the second number is shifted one bit to your right. If the variable “a” holds the value “8”, then you can shift it right by one position, with the following statement:
a >> 1
This expression when converted to decimal value would be evaluated as “4”. You can shift a number by several bits. For example, you can change “8” into “2” by shifting the digit’T by two bits to the right by using the expression:
a >> 2

The left shift (<<) operator shifts bits of the number to the left for a specified number of bit positions. This means it adds Os to the empty least-significant places. Each number is represented in memory by bits or binary digits, i.e., 0 and 1. The expression takes the form: 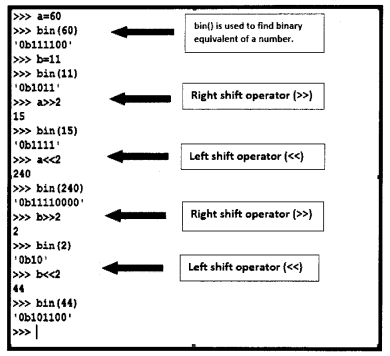 The bin( ) method converts and returns the binary equivalent string of a given integer. 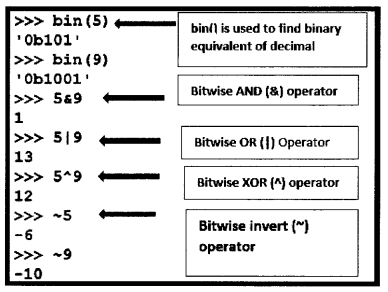 Write the output of the following bitwise operations: