Python 2 Vs Python 3 with Examples

Python is a highly versatile and interpreted, high-level, general-purpose programming language. It was created by Guido van Rossum and first released in 1991. Python’s design philosophy emphasizes code readability and ease of use. Since then, Python has grown in popularity and is an excellent choice in scripting and rapid application development.

A lot of legacy applications are still written in Python 2. Companies facing a migration to Python 3 requires knowledge of the differences in both syntax and behavior. The purpose of this article is to outline the differences between Python 2 and Python 3. With examples, you will see how functions look syntacally the same in one version but behave completely different in another version.

What Version Should I Use?

Depending on what your needs are and what you want done, choose the version that will help you the most. If you can do exactly what you want with Python 3.x then great! There are however, a few downsides such as:

As long as Python 3.x is installed on your users’ computers (which in most cases are because most people reading this are developing something for themselves or on an environment they control) and you are writing things where you know none of the Python 2.x modules are needed, it is an excellent choice. Also most Linux distributions already have Python 3.x installed and nearly all have it available for end users. One caveat may be if Red Hat Enterprise Linux (through version 7) where Python 3 does exist in the EPEL repository, but some users may not be allowed to install anything from add-on locations or unsecured locations. Also some distributions are phasing Python 2 out as their former default install.

Instructors should be introducing Python 3 to new programmers, but discussing the differences in Python 2.

Refrain from starting any new development in Python 2 because as of January 2020, Python 2 will be EOL (“End of Life”) meaning all official support will cease.

What is the Difference Between Python 2 and 3?

We will discuss the major differences in each section of this article and provide examples of console screenshots in both Python 2 and Python 3.

From a library standpoint, the libraries are hugely different in Python 2 vs Python 3. Many libraries developed for Python 2 are not compatible in Python 3. The developers of libraries used in Python 3 has good standards and have enhanced the Machine Learning and Deep Learning libraries.

Integer Division in Python 2 and 3

In the console screenshot below, you see the division of two integers. The result in Python 2 is also an integer. The fractional part is missing.

In the console screenshot below, you see the division of two integers in Python 3. The result is a floating point number that includes the fractional part that is missing in Python 2.

In this example, we use the print function with three arguments and we get the same result as in Example 3 with Python 2. However when we want to print the tuple, we have to surround the tuple with another set of rounded brackets.

To get the same result in Python 2 as Python 3, we can use the future directive to direct the compiler to use a feature that is available in a future release.

Unicode Support in Python 2 vs Python 3

In Python 2 when you open a text file, the open() function returns a ASCII text string. In Python 3, the same function open() returns a unicode string. Unicode strings are more versatile than ASCII strings. When it comes to storage, you have to add a “u” if you want to store ASCII strings as Unicode in Python 2.

In Python 2, there are two different kinds of objects that can be used to represent a string. These are ‘str’ and ‘unicode’. Instances of ‘str’ are byte representations whereas with unicode, are 16 or 32-bit integers. Unicode strings can be converted to byte strings with the encode() function.

In Python 3, there are also two different kinds of objects that can be used to represent a string. These are ‘str’ and ‘bytes’. The ‘str’ corresponds to the ‘unicode’ type in Python 2. You can declare a variable as ‘str’ and store a string in it without prepending it with a ‘u’ because it is default now. ‘Bytes’ corresponds to the ‘str’ type in Python 2. It is a binary serialization format represented by a sequence of 8-bits integers that is great for sending it across the internet or for storing on the filesystem.

Error handling in Python consists of raising exceptions and providing exception handlers. The difference in Python 2 vs Python 3 are mainly syntactical. Let’s look at a few examples.

In the console screenshot below, we try to raise error in both formats and it works. 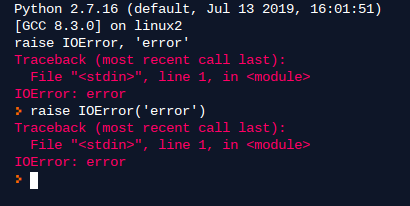 In the console screenshot below, raising error does not work in Python 3 as it was in Python 2.

With exception handlers, the syntax has changed slightly in Python 3.

In the console screenshot below, we specify a try block with an exception handler. We purposely cause an error by specifying an undefined name in the ‘try’. 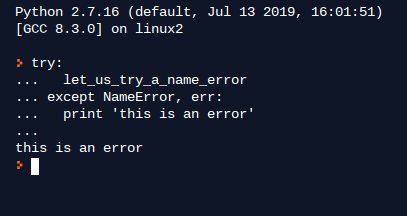 In the console screenshot below, we specify the same code as the previous example in Python 2. Notice the new syntax in Python 3, requiring us to use the word ‘as’.

In Python 2, it was possible to compare unorderable types such as a list with a string.

Example 13. Comparing a list to a string in Python 3.

New in Python 3, a TypeError is raised if you try to compare a list with a string.

XRange in Python 2 vs Python 3

In the console screenshot below, we see that the range() function returns a list containing 5 elements because we passed ‘5’ as an argument. When we use xrange(), we get an object back instead.

As you can see from the console screenshot below, entering the range() function with ‘5’ as an argument causes an object to be returned. However when we try to use the xrange() function, we see that Python 3 does not like it because it is undefined.

In Python 2, there were a number of functions that return lists. In Python 3, a change was made to return iterable objects instead of lists. This includes the following functions:

Future Module in Python 2 vs 3

Now in your Python 2 code, dividing two integers will result in a floating point number.

Example 16. Importing from the __future__ module.

As you can see below, when we divide 2 / 3, we get 0 which is type integer. But after we import division from the __future__ module, 2 / 3 returned type floating point number.

There are other things you can specify to make your future migrations easier. They include: