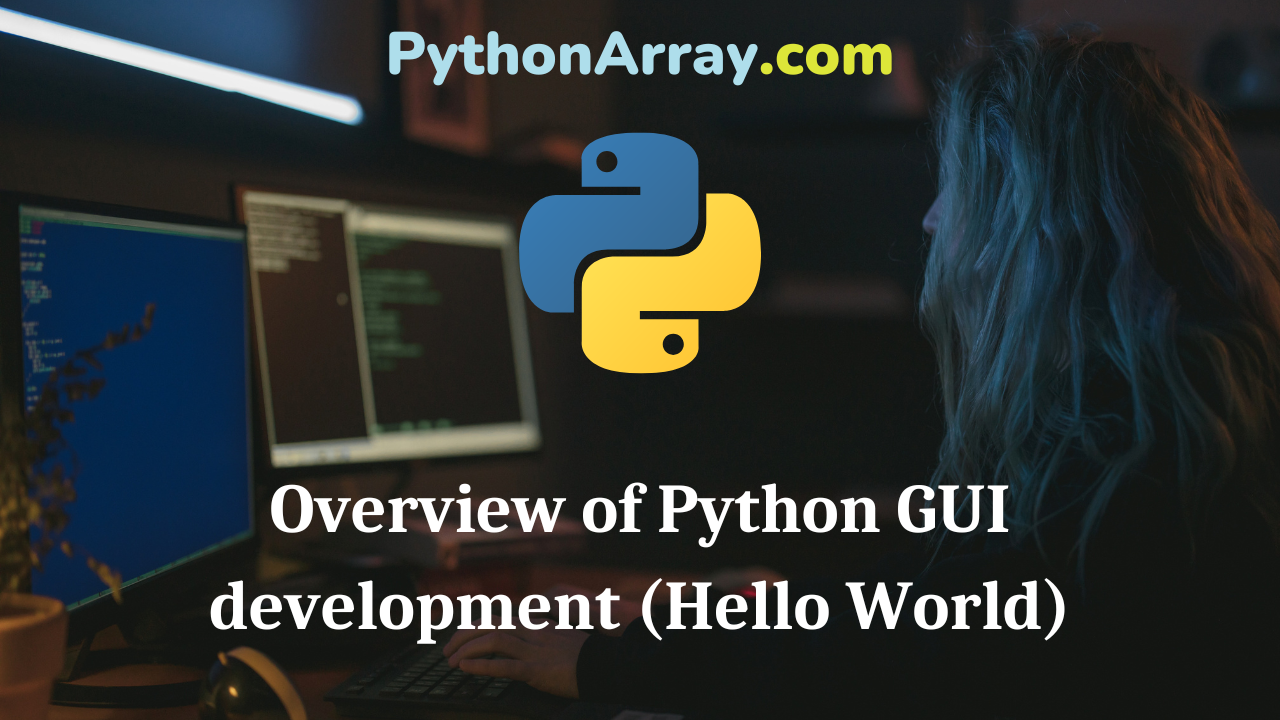 Python is well suited for rapid development of cross-platform applications of all sorts, and that includes desktop GUI apps. There are choices to be made when starting to develop a GUI application in Python, however, and this article provides the information you need to set out on the right path. We will discuss what serious GUI toolkits are available for Python, their strengths and weaknesses, and provide a simple demo application for each one.

The demo application is simple: a window containing a combo box that presents the choices “hello”, “goodbye”, and “heyo”; a text box in which free text can be entered; and a button which, when clicked, prints a greeting assembled from the values of the combo box and text box — e.g. “Hello, world!” — to the console. Here is a mockup of the example app: 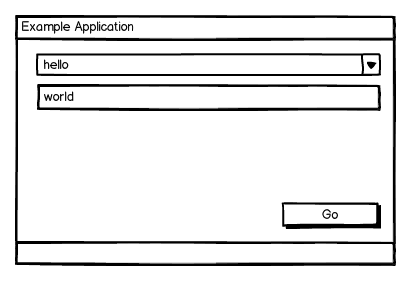 Note that all the toolkits discussed here lend themselves to a similar object-oriented approach to our simple application; it is an object that inherits from a top-level GUI object, such as an application, window, or frame. The application window is filled with a vertical layout widget that manages the arrangement of the control widgets. Other GUI toolkits for Python, such as the long-obsolete pyFLTK or the simplistic easygui, take different approaches, but the toolkits discussed here represent the mainstream of Python GUI library development.

I have attempted to provide idiomatic code for each toolkit, but I am not expert in a couple of them; please let me know in the comments if I’ve done anything that might be misleading to new developers, and I’ll do my best to update the examples.

There are several toolkits available for GUI programming in Python; several are good, none are perfect, and they are not equivalent; there are situations where one or more otherwise excellent toolkits will not be appropriate. But the choice is not difficult, and for many applications, any GUI toolkit you choose will work. In the toolkit sections below, I’ve tried to honestly lay out the drawbacks and advantages of each, to help you make an informed choice.

A caution: Much of the information available online — for example, in the Python wiki’s GUI article or the Python 2.7 FAQ — is out-of-date and misleading. Many of the toolkits on those pages have been unmaintained for five years or more, and others are too immature or undocumented for serious use. Also, do not use the Choose Your GUI Toolkit page I’ve seen bandied about here and there; its weighting code makes it almost impossible to choose anything but wxPython.

We will look at the four most popular Python GUI toolkits: TkInter, wxPython, pyGTK/PyGobject, and PyQt/PySide.

TkInter is the grand old man of the Python GUI world, having been distributed with Python almost since the language was founded. It is cross-platform and omnipresent, stable and reliable, and easy to learn, it has an object-oriented, brilliantly Pythonic API, and it works with all Python versions, but it has some drawbacks as well:

Before Python 2.7/3.1, TkInter had no support for theming, so on every platform its custom-drawn widgets looked like Motif circa 1985. Since, the ttk module has introduced themed widgets, which improve the look somewhat but leave some unorthodox controls, such as OptionMenus, in place.

Tkinter lacks some widgets other toolkits provide, such as non-textual listboxes, real combo-boxes, scrolled windows, and others. Some additional controls have been supplied by third parties, e.g. Tix to supply the lack. Mock up your application in advance if you consider using TkInter, and make sure it can provide every control you need, or you could get burned later.

Note that at the time of writing, wxPython is only available for Python 2.x

Guido van Rossum, the creator of Python, says of wxPython:

wxPython is the best and most mature cross-platform GUI toolkit, given a number of constraints. The only reason wxPython isn’t the standard Python GUI toolkit is that Tkinter was there first.

At least, he said that once, a long time ago; and how much GUI programming does Guido van Rossum do, anyway?

At any rate, wxPython does have a lot of good points. It has a vast set of widgets, native look-and-feel on Windows, Linux, and OS X, and a large-enough user base that at least the obvious bugs have been caught. It’s not included with Python, but installation is easy, and it’s available for all recent Python 2.x releases; wxPython is probably now the most popular GUI library for Python.

It’s not perfect, though; its documentation is atrocious, and though the exemplary demo app is priceless documentation itself, it’s about all the help you’re going to get. I personally find the API unPythonic and unpleasant, but others disagree. Still, you’ll almost never get in the middle of a project using wxPython and find it can’t do what you need, which is a big recommendation for it.

pyGTK is a cross-platform widget toolkit based on GTK+, a broadly-used GUI toolkit developed originally for the image manipulation program GIMP. pyGobject is a new revision of pyGTK that uses GObject introspection and supports features of GTK3. Both versions’ APIs are closely related, and their capabilities and drawbacks are similar, so they can be considered as one for our purposes. The developers of pyGTK recommend using pyGobject for new development.

pyGTK only uses native widgets on Windows and Linux. Support for native widgets and windowing on OS X, though available in GTK+, is still under development in pyGTK; right now its look and feel on Mac emulates that of Linux. The widgets are, however, themeable, and there are a large number of very attractive themes. pyGTK is also most successful with Python 2.x; new versions begin to support Python 3 but are not complete, especially on Windows. Installation for Windows previously required downloading multiple packages from different sources, but recently all-in-one binary installers have been made available.

On the positive side, pyGTK is stable and well-tested and has a full selection of widgets. It also has excellent documentation and, if you like that sort of thing, an excellent visual GUI generator called Glade. Its API is straightforward and mostly simple, with only a few exceptions, and there is fairly good example code available. The bottom line for pyGTK: it is a solid and capable GUI toolkit that suffers from cross-platform inconsistency and the effects of being less popular than other equally good alternatives.

A special note about choosing pyGTK: if your application involves a variety of simple, text-based listboxes, pyGTK’s design will cause problems. Its strict separation of concerns and model-view-controller division make listboxes unusually complicated to develop compared to other toolkits. Failing to observe this point put me way behind on an important project when I was new to Python GUI development.

Qt is more than a widget toolkit; it is a cross-platform application framework. PyQt, its Python interface, has been around for years, and is stable and mature; it has gained some cruft over the years, with two APIs available, known as API 1 and API 2, and a large number of deprecated features. Furthermore, even though Qt is available under the LGPL, PyQt is licensed under the GNU GPL versions 2 and 3 or in a fairly expensive commercial version, limiting your licensing options for your code.

PySide is a response to the drawbacks of PyQt. It is released under the LGPL and omits all deprecated features prior to PyQt 4.5 as well as the entire API 1, but otherwise is almost fully compatible with PyQt API 2. It is slightly less mature than PyQt, but is more actively developed.

No matter which wrapper you choose, Python and Qt work beautifully together. The more modern API 2 is fairly Pythonic and is clear, there is very good documentation available (although its roots in the C++ Qt documents are obvious), and the resulting applications look smashing in recent versions, if not quite native. There is every GUI widget you could possibly desire, and Qt supplies more — interesting classes to deal with XML, multimedia, database integration, and networking — though you’re probably better off using the equivalent Python libraries for most of the extra functionality.

The biggest downside of using a Qt wrapper is that the underlying Qt framework is huge. If it’s important to you that your distributable package be small, choose TkInter, which is not only small, but already a part of Python. Also, while Qt employs operating system APIs to adapt its widgets to your environment, not all are strictly native; wxPython would be a better choice if native look-and-feel is a major consideration for you. But PyQt has a lot going for it, and is certainly worth consideration.

Note: For Qt, I’ve used PySide; the example code would run using PyQt with only a few lines’ difference.