How to use urllib2 in Python 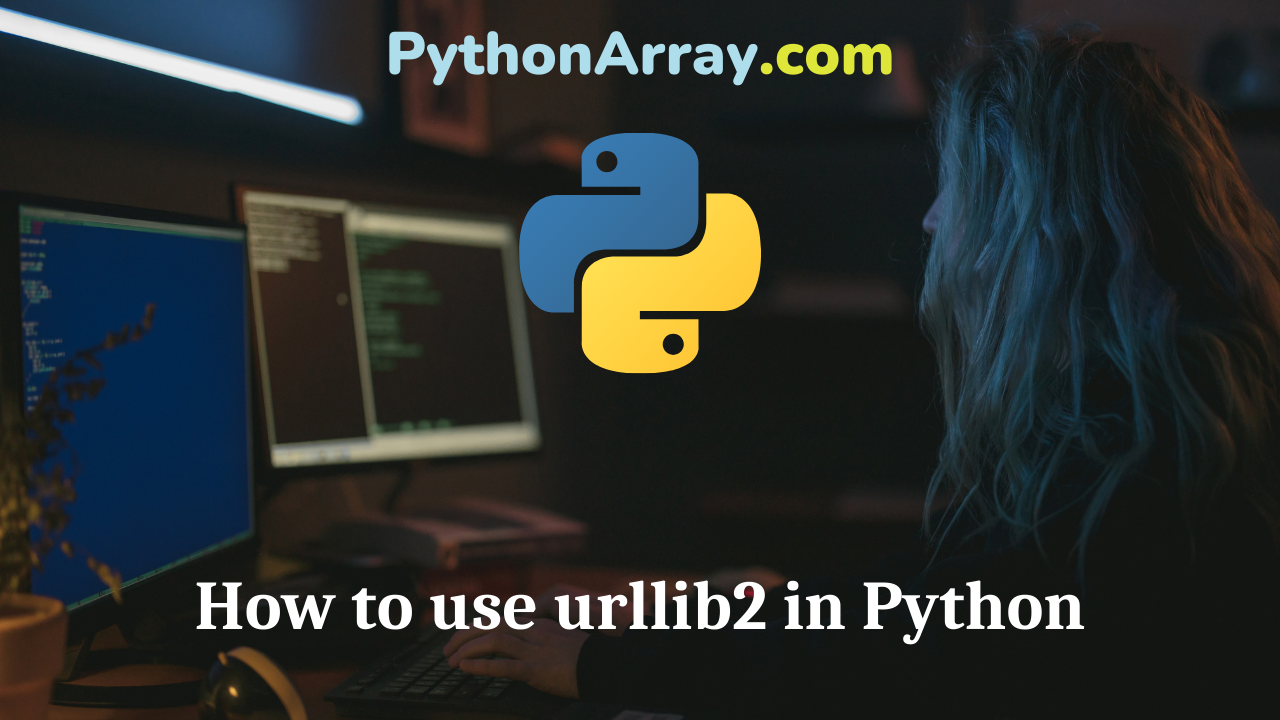 While the title of this posts says “Urllib2”, we are going to show some examples where you use urllib, since they are often used together.

This is going to be an introduction post of urllib2, where we are going to focus on Getting URLs, Requests, Posts, User Agents and Error handling.

Also, this article is written for Python version 2.x

A program on the Internet can work as a client (access resources) or as a server (makes services available).

An URL identifies a resource on the Internet.

urllib2 is a Python module that can be used for fetching URLs.

The magic starts with importing the urllib2 module.

What is the difference between urllib and urllib2?

While both modules do URL request related stuff, they have different functionality

urllib2 can accept a Request object to set the headers for a URL request, urllib accepts only a URL.

urllib provides the urlencode method which is used for the generation of GET query strings, urllib2 doesn’t have such a function.

Because of that urllib and urllib2 are often used together.

urllib2 offers a very simple interface, in the form of the urlopen function.

This function is capable of fetching URLs using a variety of different protocols (HTTP, FTP, …)

Just pass the URL to urlopen() to get a “file-like” handle to the remote data.

Additionaly, urllib2 offers an interface for handling common situations – like basic authentication, cookies, proxies and so on.

These are provided by objects called handlers and openers.

This is the most basic way to use the library.

Below you can see how to make a simple request with urllib2.

Begin by importing the urllib2 module.

Place the response in a variable (response)

The response is now a file-like object.

Read the data from the response into a string (html)

Do something with that string.

Note if there is a space in the URL, you will need to parse it using urlencode.

Let’s see an example of how this works.

The remote server accepts the incoming values and formats a plain text response to send back.

The return value from urlopen() gives access to the headers from the HTTP server through the info() method, and the data for the remote resource via methods like read() and readlines().

Additionally, the file object that is returned by urlopen() is iterable.

Let’s show another example of a simple urllib2 script 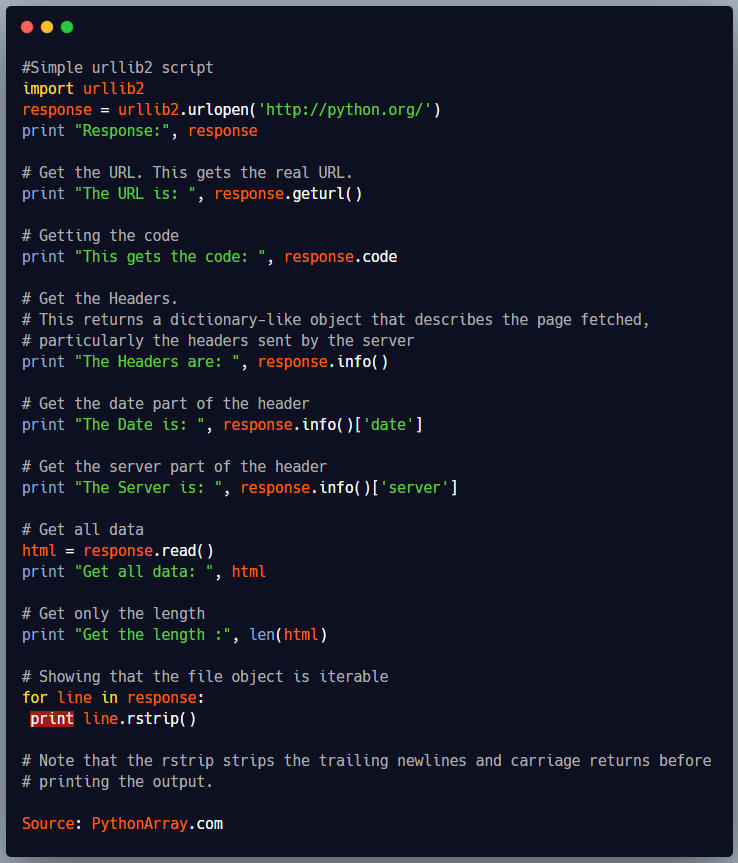 The difference in this script is that we use ‘wb’ , which means that we open the file binary.

The Request object represents the HTTP request you are making.

In its simplest form you create a request object that specifies the URL you want to fetch.

Calling urlopen with this Request object returns a response object for the URL requested.

The request function under the urllib2 class accepts both url and parameter.

When you don’t include the data (and only pass the url), the request being made is actually a GET request

Let’s take a look at the example below

You can set the outgoing data on the Request to post it to the server.

Additionally, you can pass data extra information(“metadata”) about the data or
the about request itself, to the server – this information is sent as HTTP
“headers”.

If you want to POST data, you have to first create the data to a dictionary.

Make sure that you understand what the code does.

The way a browser identifies itself is through the User-Agent header.

By default urllib2 identifies itself as Python-urllib/x.y
where x and y are the major and minor version numbers of the Python release.

This could confuse the site, or just plain not work.

With urllib2 you can add your own headers with urllib2.

The reason why you would want to do that is that some websites dislike being browsed by programs.

If you are creating an application that will access other people’s web resources, it is courteous to include real user agent information in your requests, so they can identify the source of the hits more easily.

When you create the Request object you can add your headers to a dictionary, and use the add_header() to set the user agent value before opening the request.

You can also add headers with “add_header()”

The example below, use the Mozilla 5.10 as a User Agent, and that is also what will show up in the web server log file.

Let’s say you have an url:
http://www.python.org:80/index.html

The scheme would be http

The location would be www.python.org:80

The path is index.html

We don’t have any query and fragment

The most common functions are urljoin and urlsplit

For more information about urlparse, please see the official documentation.

When you pass information through a URL, you need to make sure it only uses specific allowed characters.

Allowed characters are any alphabetic characters, numerals, and a few special characters that have meaning in the URL string.

The most commonly encoded character is the space character.

You see this character whenever you see a plus-sign (+) in a URL.

This represents the space character.

Arguments can be passed to the server by encoding them with and appending them to the URL.

Let’s take a look at the following example.

If I would print this now, I would get an encoded string like this:
q=query+string&foo=bar

This sets the variable artist equal to:

This section of error handling is based on the information from Voidspace.org.uk great article:
“Urllib2 – The Missing Manual”

urlopen raises URLError when it cannot handle a response.

HTTPError is the subclass of URLError raised in the specific case of HTTP URLs.

Often, URLError is raised because there is no network connection, or the specified server doesn’t exist.

In this case, the exception raised will have a ‘reason’ attribute, which is a tuple containing an error code and a text error message.

Every HTTP response from the server contains a numeric “status code”.

Sometimes the status code indicates that the server is unable to fulfill the request.

The default handlers will handle some of these responses for you (for example, if the response is a “redirection” that requests the client fetch the document from a different URL, urllib2 will handle that for you).

For those it can’t handle, urlopen will raise an HTTPError.

When an error is raised the server responds by returning an HTTP error code and an error page.

You can use the HTTPError instance as a response on the page returned.

This means that as well as the code attribute, it also has read, geturl, and info, methods.

Please take a look at the links below to get more understanding of the Urllib2 library.