How to Use Python Django Forms

What is a HTML form? What kind of use cases does it have?

A webform, web form or HTML form on a web page allows a user to enter data that is sent to a server for processing. Forms can resemble paper or database forms because web users fill out the forms using checkboxes, radio buttons, or text fields. For example, forms can be used to enter shipping or credit card data to order a product, or can be used to retrieve search results from a search engine.

A HTML form is the most common way to send data from a client application to a server. In this article, we are going to learn how to use Django’s Form library to handle HTML forms.

In one of the previous articles, Writing Views to Upload Posts for Your First Python Django Application, we learned how to use request.POST variable to retrieve data from a HTML form. However, simply retrieving data is not enough because we would probably want to handle data validation and avoid writing the HTML form manually in a template.

Before we dive into the details about writing a form, we need to know the following concepts:

Now let’s go ahead and create a form object that represents a Post in myblog/forms.py.

Then we create a new view that returns our form in the context.

Then we create a new template that renders our form inside an HTML page in myblog/templates/post_form_upload.html.

Finally, we modify myblog/urls.py to append the following entry:

Now we can access the URL http://localhost:8000/post/form_upload.html to take a look at our new post form page:

Filling out the form and clicking “submit” redirect you to the new post’s detail page: 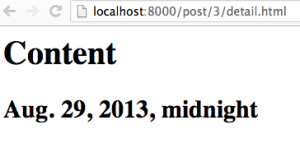 Since both the “content” and “created at” fields are required, you will get an error when you try to upload an empty field. 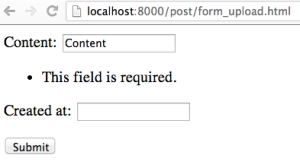